Veronica Ngo’s Tam Cam Is Worth a Watch (OC Weekly) 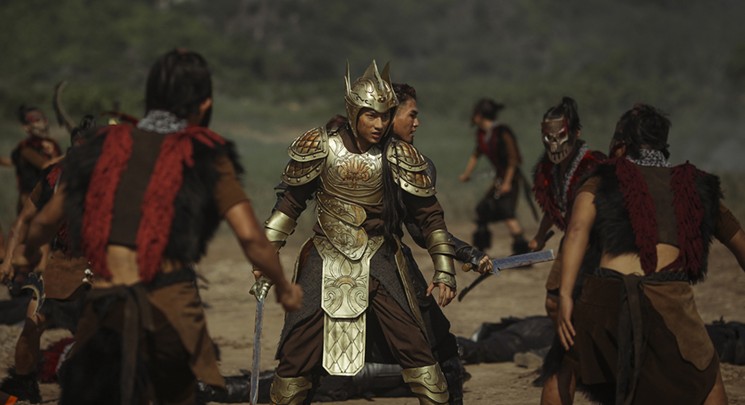 After the release of Cinderella, Kenneth Branagh’s 2015 film that closely resembles the 1950 animated Disney classic, one thing I was resolutely sure of was that we didn’t need yet another cinematic adaptation of the same old fairy tale. And yet, like Cinderella sweeping into the prince’s palace, ready to steal his heart, here comes Veronica Ngo’s Tam Cam: The Untold Story. Tam Cam is based on the Vietnamese version of Cinderella. If you don’t already know it, it’s worth a Google search. In fact, stop reading this review now and read about it. It’s a more fascinating and darker version, brought to higher levels of incredibility and spectacle in Ngo’s film.

Ngo (who was in Star Wars: The Last Jedi and plays the wicked stepmother here) chose an old cultural folk tale that she and her team of screenwriters—Anh Hoang, Pham Jun, Aaron Toronto, Uyen Nha and Thai Nguyen—punched up with high-flying martial-arts sequences, sword fights, CGI supernatural monsters, evil curses and battling armies. Had the writers and director stayed faithful to the original subject matter, it still would have been flowing with macabre, gnarly undercurrents and would have rightfully kept the focus on the two half-sisters Tam and Cam. But as the filmmaker sets out to make a more expansive adventure and fantasy tale, it ends up being a wild, confounding ride that piles on the drama and thrills without too much attention to logical explanations. Nevertheless, it’s all so entertaining and off-the-wall, I’m on board for it. I can’t imagine Lily James’ Cinderella, lovely as she is, reincarnating into a powerful tree the way Tam does. She’s got a curfew at midnight.

Tam Cam is similar to the Disney/Grimm Brothers narrative in its first half, down to the fairy godmother (or -father, or Buddha in some tellings), evil stepmother and stepsister, and lost slipper leading to the prince and Tam’s romance. The paradigm shifts when Tam (Ha Vi), our beautiful, abused underdog, is killed by her stepmother, who tricks her into climbing a betel nut tree that she then chops down. In the story, it’s so Cam can usurp Tam’s place and become the prince’s wife. In the film, it is part of a larger plot planned by a royal magistrate, who is actually a half-sorcerer/half-scorpion monster masking as a human, to kill the prince and take over the kingdom when the ailing emperor passes. The animated alter ego of the magistrate is pretty good at looking terrifying—but the how and why of his monstrous existence is still unclear.

The film takes liberties in giving the prince a more active storyline so that he’s primed as a hero and not another privileged heir waiting around for Dad to cash in his chips. Played here by the dreamy Isaac, he’s a virtuous, kindhearted young man, a wise military strategist and a strong warrior. He refuses to marry for money and status, and the film’s second half focuses more on his mission to take back the kingdom from the backstabbing magistrate and invading enemy Chinh La forces. I only wish more of that same bravado was assigned to Tam; while her arc goes from a meek, fearful young woman to one who finds her power after death when she reincarnates into an oriole, then a tree, then a fruit, then, miraculously, herself, we don’t get to delight in seeing Tam’s sojourn into the afterlife through her perspective. But a reincarnating princess with the ability to haunt in whatever form she’s in is badass in itself.

The wonders of this supernatural period piece are brought to life with lush landscape shots, exquisite costumes, dramatic orchestral scores and pristine production design. Everyone, from principal stars to side characters, delivers impeccable performances, and there are plenty of moments of humor and comic relief. I was so fully immersed in the fantasy, adventure and romance typical of Vietnamese cinema that I could never accuse Tam Cam of being dull. So let the floodgates open for more international versions of old-school fairy tales to hit the big screens! Visibility for global cinema in the States is perhaps the biggest “happily ever after” we can hope for.