A young couple moves into the house of their dreams which quickly becomes a living nightmare when they discover a dark secret awaiting them in the cellar. It has been locked up for years, trapped inside “The Black Room” and it wants out now! A demon who seduces with unholy pleasures, feeds on fear, and violently kills all who cross its’ path. You’re invited to the open house of the sexiest horror film of 2017! Enter if you dare…

Why did you decide to submit to FirstGlance?

I (Rolfe Kanefsky) have a been submitting to FirstGlance for years. A long time ago, one of my other films, “TOMORROW BY MIDNIGHT” won Best Feature at Firstglance L.A. so I’m obviously a big fan of the fest.

Will someone from your team be attending FirstGlance?

My accomplished producer, Esther Goodstein, will be there for the entire festival. I plan to be there on April 21st with much of my cast and hopefully crew as well. Augie Duke, Tiffany Shepis, and fingers crossed, Lin Shaye will be attending. I am planning to fly in from Vegas where I will be directing my latest feature; a fun horror/comedy called PARTY BUS TO HELL!

What is something you feel is important for our readers to know about your film?

Well, first off THE BLACK ROOM is a horror film and would definitely be rated “R” for everything. It is also a pretty sexy movie and has a good sense of humor too. Since it deals with an evil house, demons, and such, it is definitely a supernatural flick but the people are based in real human emotions. It’s real people in an unreal situation. It is contemporary but has a bit of a throwback 70’s/early 80’s vibe as well. “Amityville Horror”, “The Entity”, “The Legend of Hell House” and “Rosemary’s Baby” were some of my influences in this one.

What should viewers expect from your film?

I hope they have a fun time. It’s a real ride. Scares, jumps, arousal, laughs, suspense. There are a lot of “haunted house” movies out there. I tried to make this different by going back to make this about adult characters. They are a married couple with no children and this evil force manipulates through desire and sexuality. There are very few horror films that embrace this “erotic horror” genre. In the past, we had “Hellraiser”, “The Entity”, “Rosemary’s Baby”, etc…. The 70’s and 80’s didn’t shy away from this kind of material. Today, only television series like “American Horror Story” and “True Blood” deal with this subject matter. I think it’s time for a movie to bring this genre back.

Do you have any production stories our readers might enjoy?

Sure. I actually wrote the script about 12 years ago. And then last year, a new film company, Cleopatra Records decided to get into the film business and wanted to make some horror films. They read the script, originally called “The Red Room” and loved it. Only change was the title to “The Black Room”. Since we were trying to keep the budget down, we cast the film without a casting director. That made finding some of our “name actors” very difficult. We managed to get Lin Shaye but executive producer, Brian Perera, wanted another strong name. As fate would have it, being in North Hollywood, I went to a CVS one day and found myself on-line right in front of Natasha Henstridge. I recognized her and built up my courage to actually introduce myself. She was very nice and after some back and forth, we ended up casting her in the lead role!

We only had 17 days to shoot this movie and there are a lot of effects in it. Most of them are practical, which was very important to me. Very ambitious and very cool. And some of the effects that were done in-camera really surprise people. They have no idea how we did them without CGI. But the nice thing about having less money is that is forces filmmakers to get more creative. Sometimes, the easier method is the most impressive. This is something many big budget Hollywood films have seemed to forget. Overall, it was a pretty smooth shoot. When you have a great cast, great crew, and have really planned it all out, good things happen. It’s all about the prep. We only ran into a few snafu’s doing post-production since we shot the film in 6K and the size of the files were enormous. But it was worth it. Also, we used these great anamorphic Russian lenses from the 70’s which gave us some amazing flares and a real film look to the whole movie. In actuality, we shot The Black Room on the Red Dragon.

What are you looking forward to most at FirstGlance?

I love meeting fellow filmmakers and of course, getting some press and reviews on the film. It’s so hard for independents to stand out from the pack today that any exposure is good. I’d love to win something as well but I’m really looking forward to seeing the reaction from a real audience. This is going to be our World Premiere so I hope everyone has a great time. Laugh, scream, cheer! It’s a fun horrific horror ride and I think a good date movie as well. If there were still drive-ins, The Black Room would be at home.

Where can our readers find more information about your film?

We have a website, www.theblackroommovie.com, my personal website www.rolfekanefsky.com
We also have a Facebook page https://www.facebook.com/theblackroommovie/
We also have a cool article on the film in Delirium Magazine #13 that came out last month.
And the big news is that THE BLACK ROOM will be opening theatrically on April 28th, 2017 at the Laemmle’s Music Hall Theater in Beverly Hills. It will be playing for a week and may expand, depending on interest. A DVD/Blu-ray release should follow in mid-June.

I love horror films and have been lucky to work in this genre many times over the last couple of decades. My first film was a now cult flick called “THERE’ S NOTHING OUT THERE”. I then made “THE HAZING” with Brad Dourif, the Warner Brothers release “JACQUELINE HYDE”, “CORPSES” with Jeff Fahey, and “NIGHTMARE MAN” that was chosen as one of the After Dark/Lions Gate “8 Films To Die For” festival. “The Black Room” is my return to the genre after ten years of making comedies, “BLONDE AND BLONDER” with Pamela Anderson and Denise Richards, a neo-noir “1 IN THE GUN” with Steven Bauer and Robert Davi, a crazy musical “ADVENTURES INTO THE WOODS”, and many female-drive Lifetime thrillers and family friendly comedies like the animated “SPACE DOGS: ADVENTURE TO THE MOON” released through Universal. Luckily, I’m a fan of all movies and love being able to jump from genre to genre. But next up is, a crazy horror/comedy “PARTY BUS TO HELL” about a party bus of sexy young adults on the way to Burning Man when they come across a desert cult of “Hills Have Eyes”-type of nomads. I’m describing it as “RACE WITH THE DEVIL” without the race but with plenty of sex, violence, and rock-n-roll!

A supernatural tale where evil takes on a sexy side. A married couple moving into their new home is faced with an entity that feeds off lust and desire, corrupting and/or killing everyone in its path as it plots a horrifying plan to destroy the world. Natasha Henstridge, Lin Shaye, and Lukas Hassel take the lead, with the supporting cast including Augie Duke, James Duval, Dominique Swain, Elissa Dowling, Robert Donovan, Catherine Annette, Julia Lehman, Lauren Parkinson, Jill Evyn, Michael Reed, Rachel Riley, Nicholas Principe, and Kanefsky’s frequent collaborator Tiffany Shepis (pictured above in NIGHTMARE MAN). Kanefsky also teases that “some surprise music legends” will be showing up. 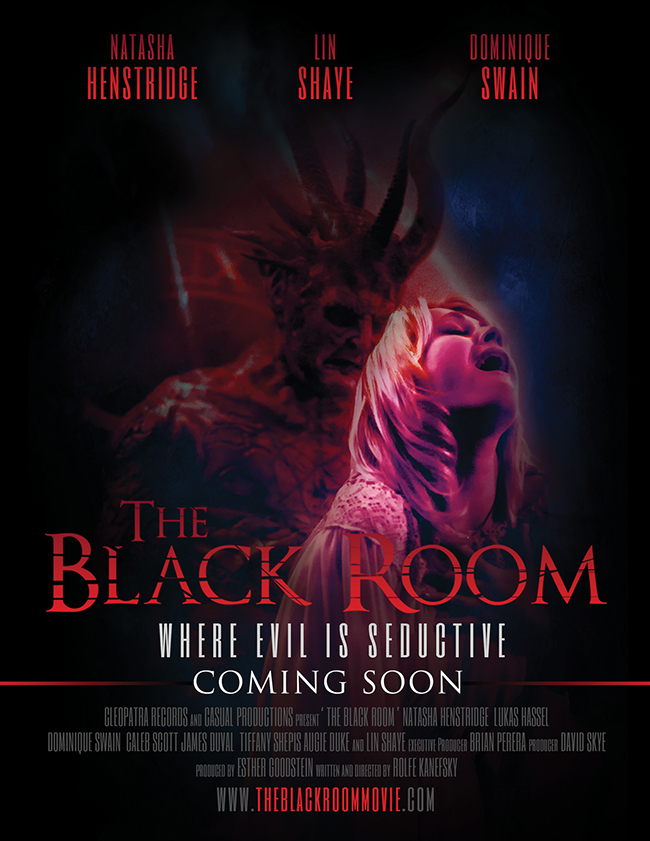